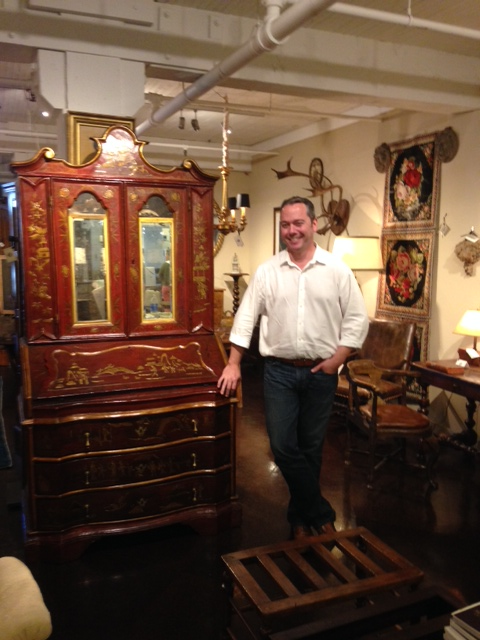 But all is not well.

Since 2008 the shop he manages, Garden Court Antiques, has been on the first floor of the building at 2 Henry Adams. From 2002 to 2006 the business was also a Bay West tenant at 5 Henry Adams. Gallagher’s been there all along.

On Monday he was shocked to learn that the company that manages the building, Bay West, is going to move Garden Court Antiques from its prime location to the back of the 4th floor of the Galleria Building across the street. Bay West manages both properties for the giant Chicago-based real estate investment firm, RREEF. He’s been given 30 days notice.

“The space they’re offering me,” Gallagher told me, “would be the death of my business.” Garden Court Antiques relies on foot traffic. People passing the shop’s ample storefront notice something unique, come in to look around, and say, “I should get that!” The first floor location in the Design Center offers “fantastic exposure.”

Not only is Bay West moving Garden Court Antiques out of its current location. The company has also told Gallagher that “there would be no change in rent, even though we pay far more for 1st floor space than one would for 4th floor space. They are basically forcing me out of their buildings.”

“I pay a premium rent for this space,” Gallagher said, “and as a Bay West tenant for the last 12 years, I have never been late.”

Garden Court’s lease, the latest of several that the business has signed with Bay West, doesn’t expire until 2016. But Gallagher and Garden Court owner Sue Coleman didn’t notice a new clause in the current lease saying that Bay West could move the shop to a different space of similar size within the two buildings and would cover the cost of the move. If, however, Garden Court was unhappy with the proposed new space, it could break the lease at that time.

Just so, Gallagher said that on Monday Bay West told him that if he didn’t want to move to the back of the Galleria’s fourth floor, he could break his lease and leave.

Gallagher added that on Monday the management company also notified tenants who had been paying down back rent that they now had three days to pay it off. “People are very afraid right now.”

He said that though “it would be a devastating loss if we were to lose this space,” he and Coleman “have every intention of continuing the business, whether it’s here or elsewhere….I have a business that can survive outside of Showplace Square.”

Meanwhile, he’s going to fight Bay West. “I am looking into what my legal options are, given that this is a clear case of retribution for doing something that was clearly legal….They can end my lease but not put me out of business.”

Gallagher has no regrets about organizing the tenants. “We did the right thing. We actually won! That’s awesome.”

And even if Garden Court Antiques eventually does have to leave the Design Center, he’s going to stay the course. “I’m 42,” he told me, “and for the next 30 years, I intend to do everything I can to keep this space [as] protected PDR [Production, Distribution, and Repair] space whether I’m here or not.”

On October 9 the Chronicle reported that Pinterest is expanding into 100,000 square feet  at 651 Brannan. Four days later, Gallagher got his 30-day notice.

Calls to Bay West’s Tim Treadway and Martha Thompson were not returned.

I asked former Mayor Art Agnos, who advocated the tenants’ cause last summer before the Board of Supervisors’ Land Use Committee, to comment.

“Unfortunately, “Agnos observed, “commercial tenants do not have many protections under San Francisco laws. If this were a residential tenant, there would be a public outrage. The story cuts across ideological lines; it could happen to anybody. It will require a very intensive legal fight and hopefully some support from the mayor and the Board of Supervisors, who can use the bully pulpit to send the message that this should be stopped. This is one of the times I wish I were still in public office to do some jawboning with Bay West and ask them what is behind this.”