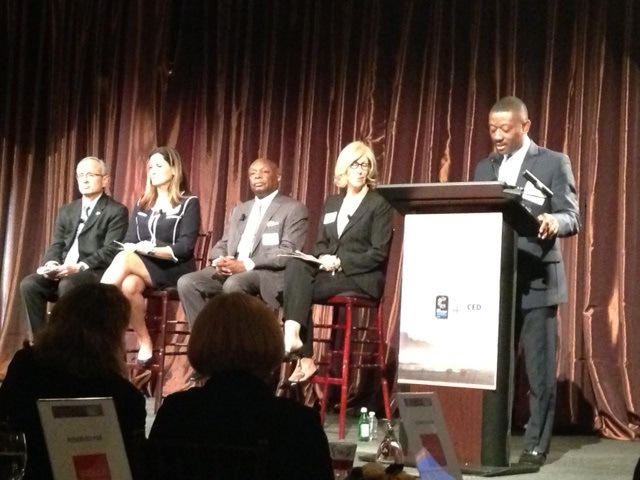 For me, as, I suspect, for many of the 300-plus attendees at the Merchant’s Exchange Building in the Financial District, the most compelling presence was former Mayor Willie Brown, who appeared as a previously unannounced panelist, and who managed to upstage everyone else, including the two featured speakers, Wells Fargo chief economist John Silvia, and Brookings Institution Vice President Bruce J. Katz, simply by being his own, unapologetically venal self—though Silvia gave him a run for his money.

Silvia led off. “It’s not in every city,” he said, clutching a bottle of water, “that you get Pellegrino. It fits into the whole culture.” A culture that, from his perspective, reflects the city’s fortunate situation: “too much happiness.” Citing San Francisco’s $80,000 per capita income and 5.2% unemployment, Silvia tweaked his listeners: “When you people complain about the rich people, you’re complaining about yourselves.”

Not that everything is perfect. “Beautiful city, great products, a lot of brilliant people doing great things. But wait a minute: What’s going on underneath?” I expected him to say: one of the worst income gaps in the nation. But instead, digital security. That’s right: what with all the credit card hacking—he mentioned the humongous breach at Home Depot—Silvia’s chief concern about San Francisco’s economy is that people might stop using their devices.

Asked how “to provide for the diversity of the city’s population,” with specific references to the affordability crisis, Silvia merely opined that it’s “important to recognize that it isa challenge that you need to do something about it.” Do tell.

His broader observations were equally disconcerting. Commenting on a major structural change in the U.S. labor market, Silvia noted that the large number of Americans now doing part-time work was “a more permanent characteristic of the U.S.” economy. Not to worry. “A lot of people like part-time jobs.” He reiterated that position during Q & A, when someone questioned the notion that people were working part-time because they preferred to do so. Yes, Silvia conceded, it saves some employers money, and results in “overqualified” workers—he mentioned Starbucks baristas. Nonetheless: “I see a lot of people who want to work part time.”

And then there were his remarks about higher education. “College,” he declared,” is an investment, not an expense.” Approaching the subject “as an economist,” he urged students to ask themselves: “What’s your expected rate of return on your education?” It’s one thing if you go to Stanford. But “are you going to study sociology at a second- or third-rate college?” I wondered what SFSU President Wong was thinking when he heard that.

Silvia was followed by Bruce Katz, who spoke about the emergence of what he called “innovation districts,” a squishy concept that encompasses places as various as Mission Bay, the “anchor plus” model, built around a major institution; Hunters Point, a “re-imagined urban area model, often found in or along historic waterfronts or other old industrial districts;” and North Carolina’s Research Triangle Park, the “urbanized science park.”

What all these have in common is that they embody the qualities that today’s cutting-edge urban boosters—think Ed Glaeser, Enrico Moretti, and Richard Florida—prize: disruption, collaboration, walkability, “cityness,” “hyper-caffeination,” talent, flexibility, urban amenities, high technology, networking, openness, and most important, growth.

Like Silvia, Katz was asked about the inequities that attend the “prosperity” born of innovation. Aren’t “benefits acrruing only to a limited few?” “That’s the central question,” he replied. “How do we have inclusive growth?” His answer was only slightly more helpful than Katz’s reply: redefine tech education and the STEM economy so that they’re widely accessible to “neighborhoods of deprivation.”

Cut to Willie Brown. His assigned theme was the history of Mission Bay. He prefaced his account by expressing his contempt for local government—useless, in his view—democratic process, and the San Francisco electorate—“this diverse, crazy voting population.”

When he became mayor of San Francisco in 1996, he said, he found himself dealing with a city where “people had allowed political decisions to be substituted for good public policy decisions.” Sacramento was “light years ahead of what was happening at the local level.” He set about “removing all the bureaucrats and staff that I had the power to remove.” The problem, then, was that “there were no replacements.”

His top priority, then, was “to get good staff” like Kofi Bonner, whom he appointed as his chief economic policy advisor. Bonner worked on Mission Bay. “I appointed six members of the Board of Supervisors,” Brown said, so “Kofi was safe” from political meddling. As he recounted the story of Mission Bay’s genesis and creation, Brown noted: “I have not used the word ‘innovation.’” (So much for Katz.) He and his cronies achieved what they did through “hard, practical” development — meaning backroom deals.

“Preferential treatment,” said Brown. “That’s what you get when you have political contacts.” And today, he boasted, Mission Bay, is “the standard for Boston and North Carolina—wherever you go.”

I confess that I found Brown’s brutal candor refreshing. Tell it like it is.